We began our Literacy in Autumn 2 by reading the Greek Myth Pandora’s Box, the children wrote a balanced argument for whether Pandora should open the box or not ensuring they used formal words and phrases. We then read Theseus and the Minotaur and the children then wrote their own ‘quest’ myth. We have also shared several Aesop’s fables and discussed the moral of the tales. The children then created their own fables choosing animals which fitted the characters within their tale.

In history this half term we have looked at how the Ancient Greeks have influenced our everyday lives in the 21st century. Furthermore, we have undertaken work on timelines and ordered important dates to the Ancient Greeks on a timeline.

In geography,  we have studied the physical geography of Greece and focused on the climate zones, biomes, vegetation belts and the mountains. We have then been able to use this to understand how and why the Ancient Greek civilisation developed in the ways that it did.

In numeracy our focus has been multiplication. We have identified multiples and factors, including finding all factor pairs of a number, and common factors of 2 numbers. We have also used formal methods to multiply numbers up to 4 digits by a one and two-digit number, including long multiplication for two-digit numbers. Furthermore, we have studied prime, square and cube numbers.

For anti-bullying week the children took part in some drama and thought about the different roles people can play in a bullying scenario. Within literacy we wrote various poems including a Haiku. The children also thought about what message they wanted to tell everyone about stopping bullying and produced some lovely posters in the form of jigsaw puzzle pieces to all fit together.

To create a wonderful winter trees display the children have written some fabulous poems which include similes, metaphors and personification. They then used a variety of techniques to produce some winter tree artwork.

For Enterprise, we couldn’t have the usual fair in the hall so Mrs Ryott set us a task to decorate our own Classrooms with resources we already had in school. We decided to develop our sewing techniques through the creation of Reindeer candy cane Christmas tree decorations and they look fabulous on our Class tree.

Christmas in school has been rather different this year however, we have made it an eventful and fun experience for the children. They have worked hard to learn their own song for the online Christmas concert and have enjoyed viewing the other classes performances. We have developed our pastel blending skills to create some Tree-rific Christmas cards. We're sure you'll enjoy the children’s rainbow inspired calendars. Hopefully, they will be a sign for after every storm, there is a rainbow. As this year is ending, we wish all the difficulties we’ve faced also end and 2021 brings we lots of joy and happiness.

All of the children were very excited to get back into school and begin Year 5, they have settled into the new routines very well. The children have quickly adjusted to working and playing together as a bubble and are showing a mature understanding about the need to keep our hands clean and socially distancing from other bubbles as we arrive too and from school.

In the first week of learning, we focused on emotions and discussed ’we are all in the same boat, we are not all in the same storm’ and thought about how this referred to our feelings during lockdown. We realised that everyone’s experiences would have been very different and used the poem below to look at the different storms.

We used oil pastels to create storm pictures and watched a video to learn the techniques of layering and blending the colours. We was very impressed with everyone’s skills. 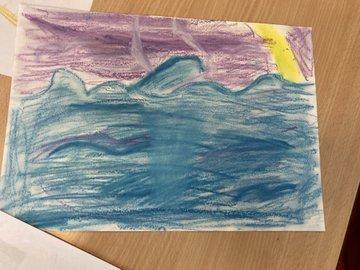 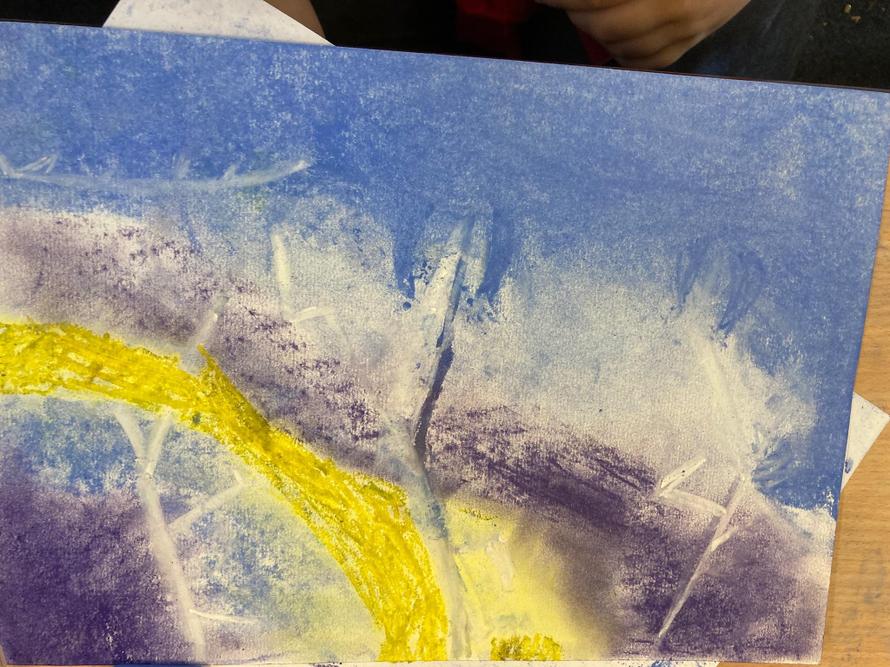 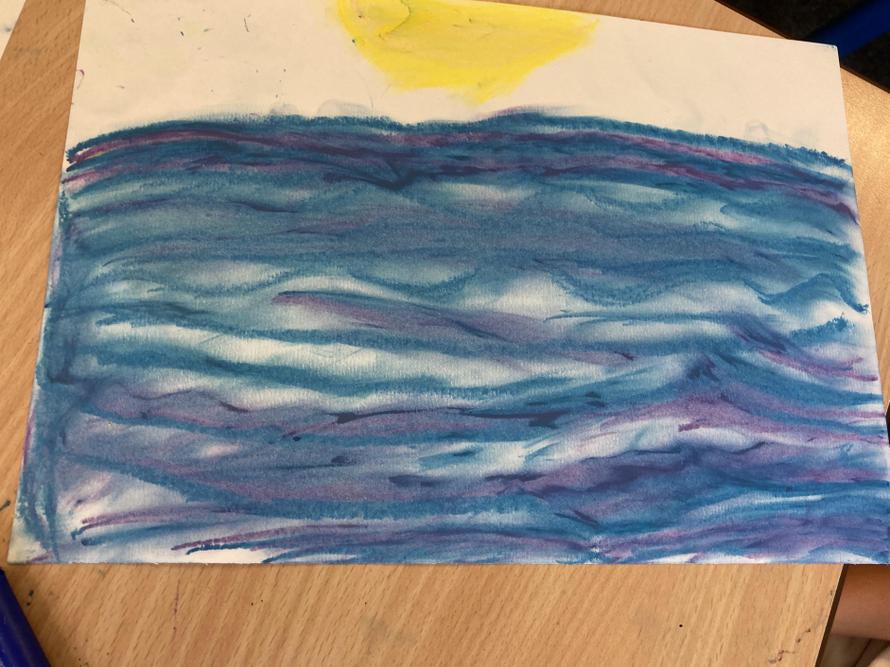 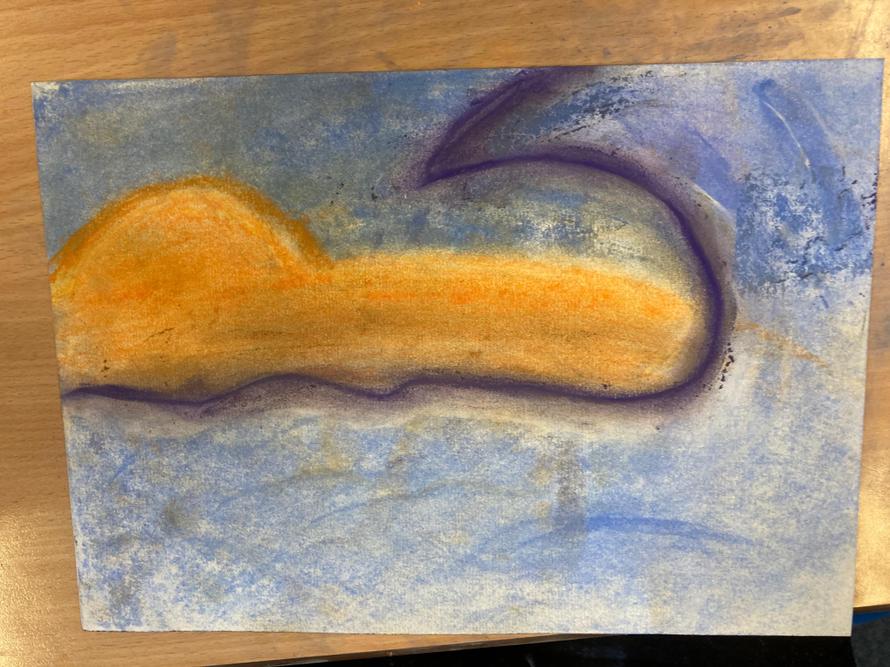 In literacy, we made Wordles about all of the different emotions we felt during lockdown. 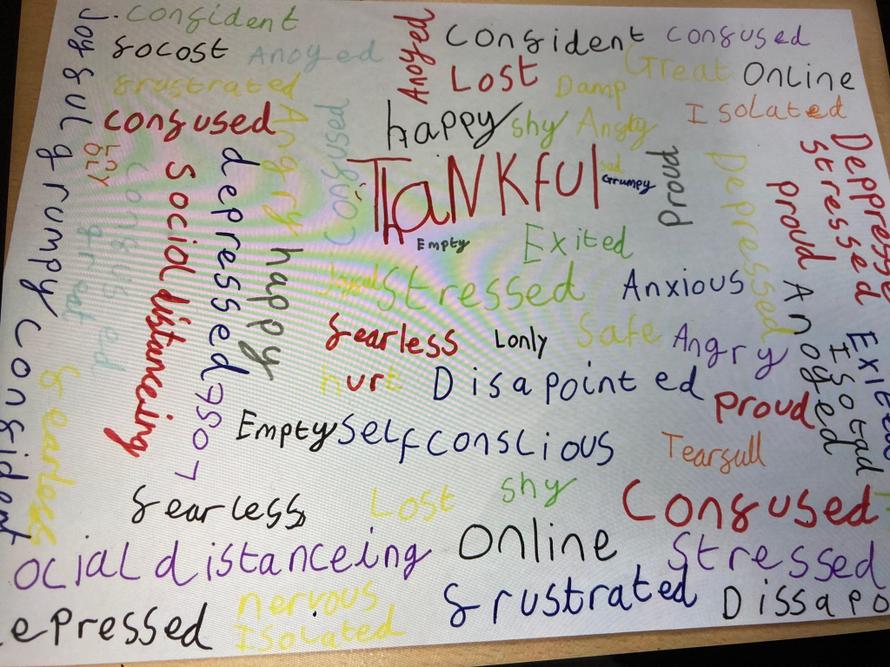 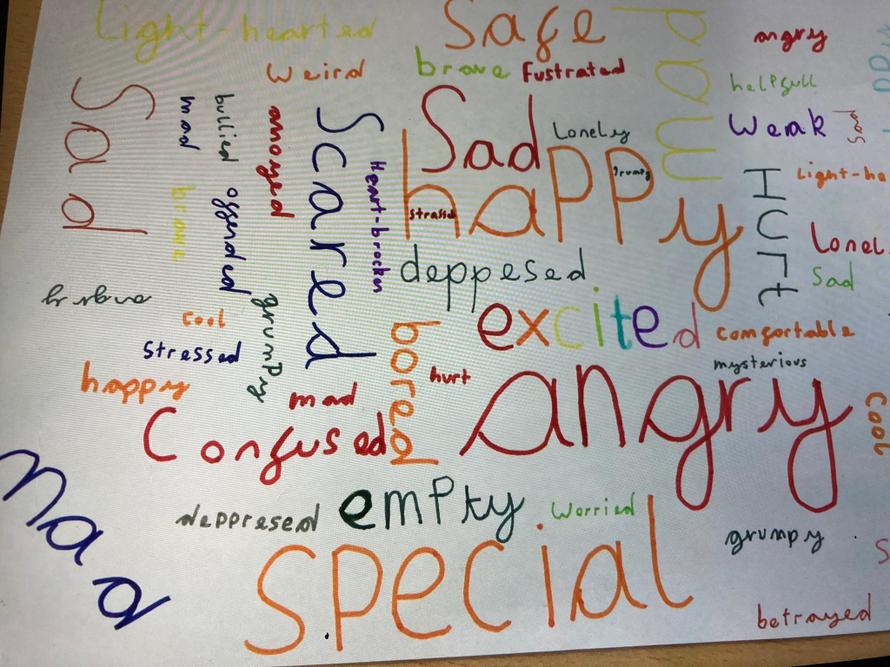 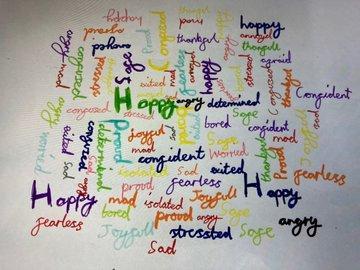 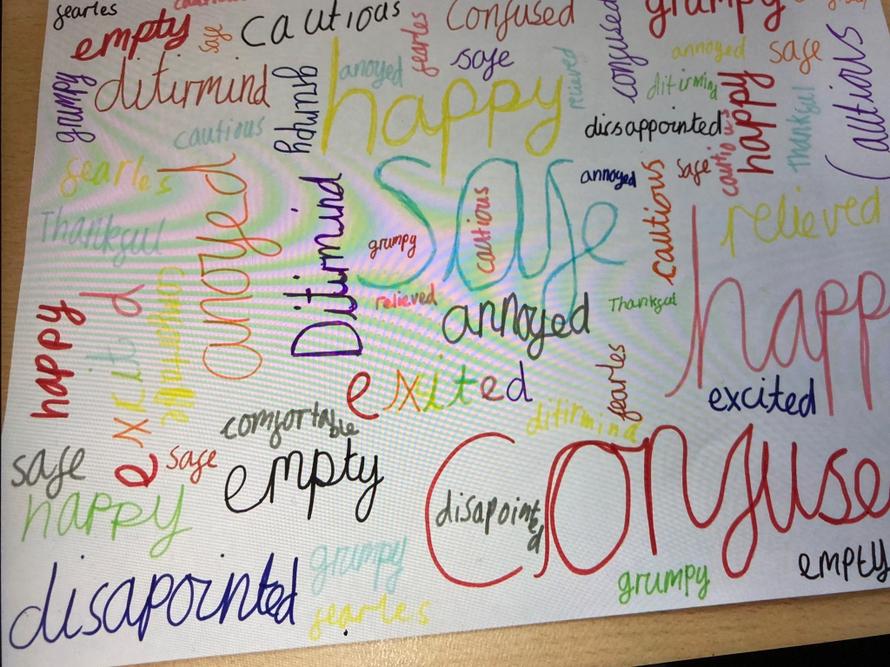 We then created our own 3D storms to represent our experiences and made origami boats from our Wordles of emotions. 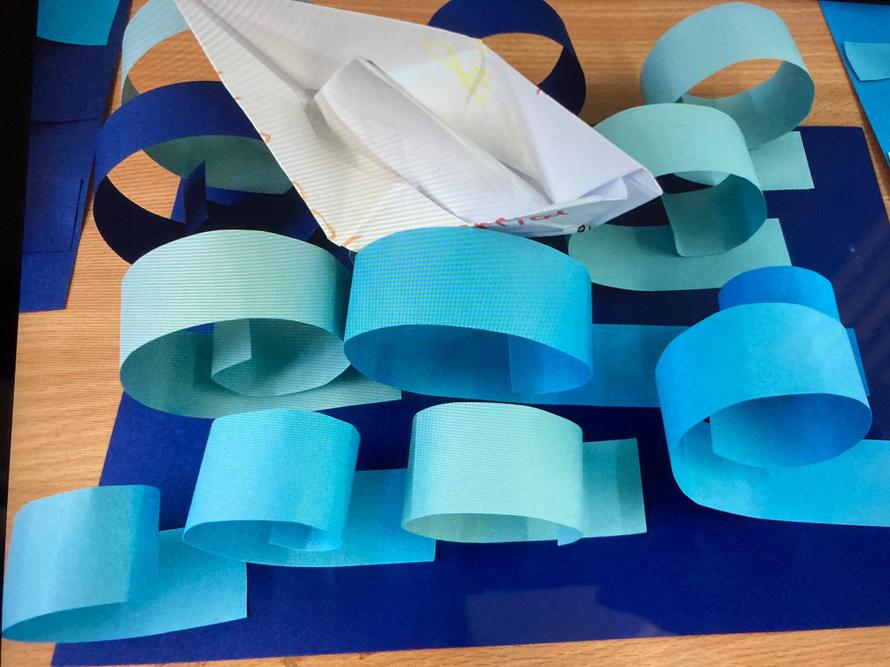 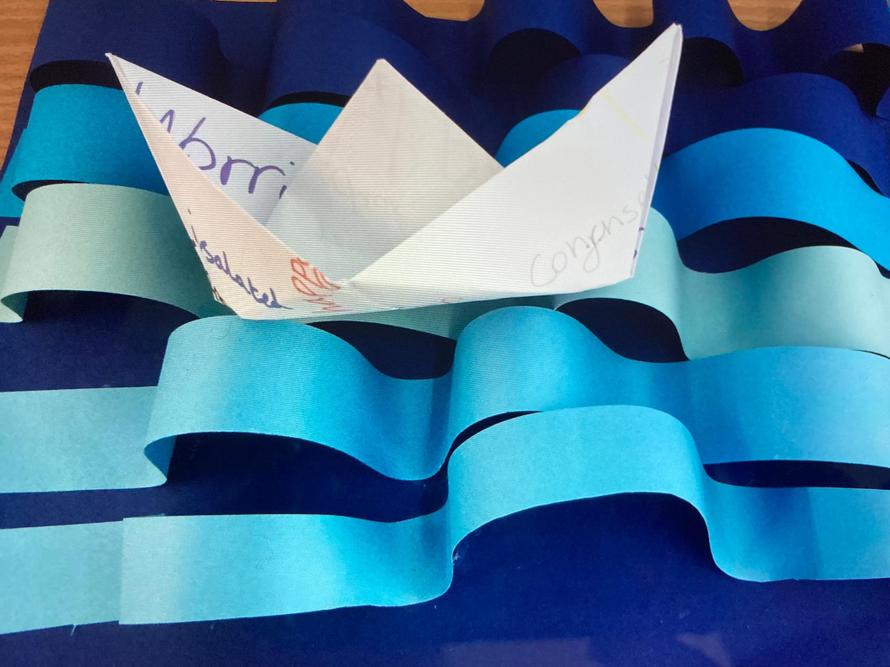 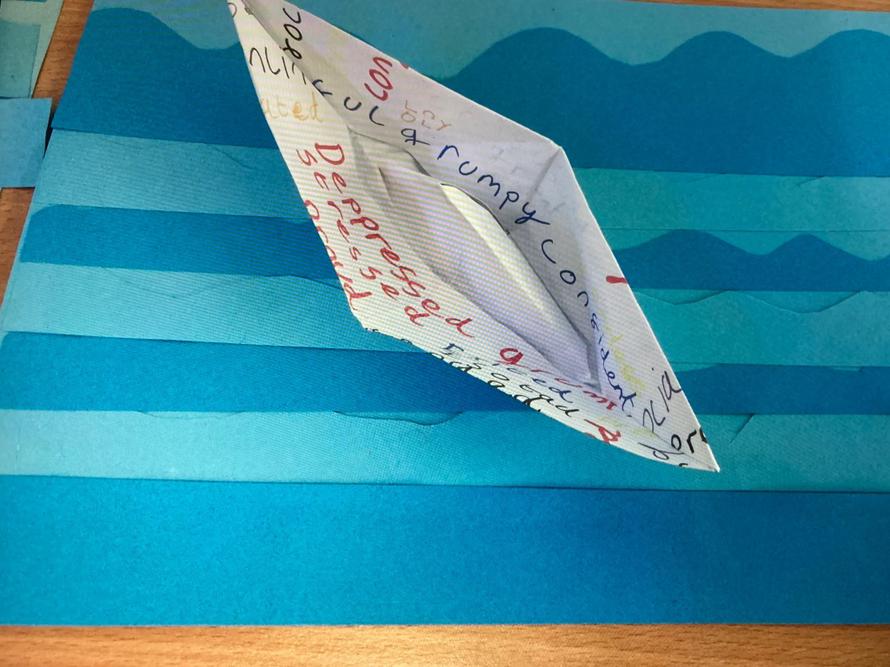 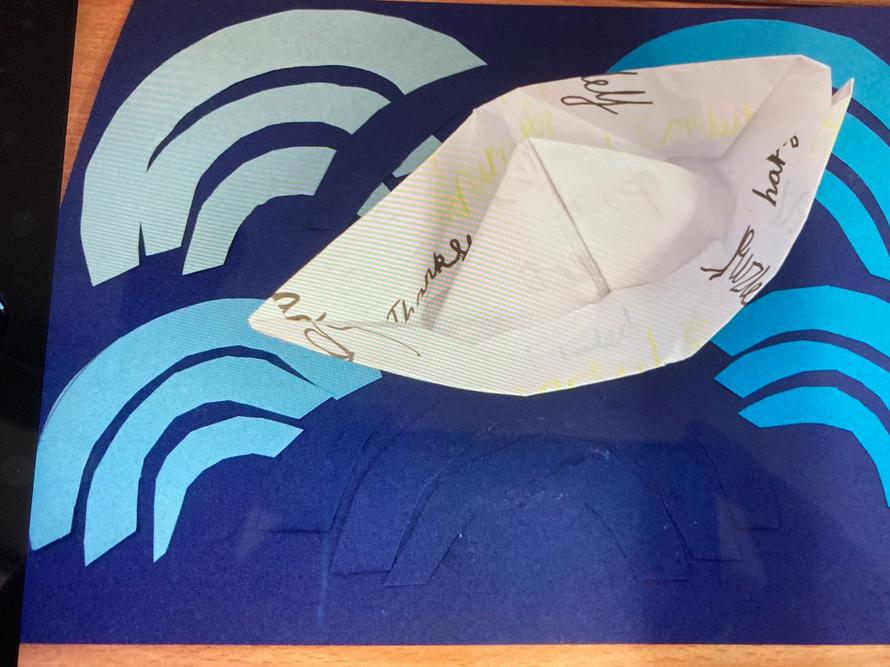 We had lots of discussions about our lockdown experiences. It was lovely to hear about the positives of more family time and learning new skills. We also talked about how it made us appreciate things which we had always taken for granted.

The theme of our first topic this year has been Journey into Space. This topic has really grasped the children’s imagination and through this they have engaged with the learning and produced some fantastic work. We have looked at the skills of pencil control and how to achieve tone and texture within our art work. We also looked at using and mixing paints correctly to achieve the perfect palette of colours for our work. This skill was then applied to create some fantastic abstract art work of images of rockets and space, which was inspired by the art of Peter Thorpe.

The Journey into Space topic, has also led to some fascinating scientific exploration and discoveries for the children. They have been exploring our solar system and finding out lots of amazing facts about the planets and moons within it. We have explored many different scientific concepts through investigations such as why we have gravity and who discovered it, how scientists eventually came to the conclusion that all the planets are spherical bodies, why it is we have day and night and also the different phases of the moon. In addition to this, the children have also used the geographical skills to explore what our planet looks like from space. They have used images taken by astronauts alongside atlases to identify where certain physical features are on our planet, such as continents, mountain ranges, rivers countries and cities.

Within literacy, Year 5 wrote space themed poetry, exploring the patterns and language of free verse poetry and raps. Continuing with space as our inspiration the children wrote some fantastic sci-fi stories, exploring the language and discovering plots of stories set in imaginary worlds, following on to plan and write their own narrative of a sci-fi voyage. The children then became journalists and their task was to report on the first moon landing. We watched documentary footage of the First Moon Landing on 20th July 1969 and researched facts. From gathering all their notes the children wrote newspaper articles.
We have also looked at diary writing from the point of view of Neil Armstrong, the first man on the moon. Using primary historical evidence, the children planned and wrote, in chronological order, a diary entry for the 20th July 1969.

To celebrate Black History Month we focused on the achievements of Marcus Rashford. To further develop our research skills, in pairs, the children used iPads to research Marcus Rashford's life.  The children were then asked how they could present their research effectively resulting in some fabulous informative posters. The final task was to create and present a presentation about Marcus to the rest of their peers. The presentations were very informative and interesting to watch. We were very excited to see a real MBE badge which one of our Redscope family members has been awarded. He kindly brought it into school for Year 5 to see.

In numeracy we have concentrated on number and place value to partition, order and compare numbers with up to 6 digits. We have also been rounding numbers to the nearest 10, 100 and 1000. We have focused on the addition and subtraction of numbers to 4 digits using column addition, rounding to check answers to calculations and solving multi-step problems. Every week we are continuing to work on multiplication facts (and linked divisions) up to 12 x 12. Using the TTRockstars login will help your child further develop rapid recall of their timestables.

We have been blown away by the quality of home learning produced for this half term. Well done Year 5. 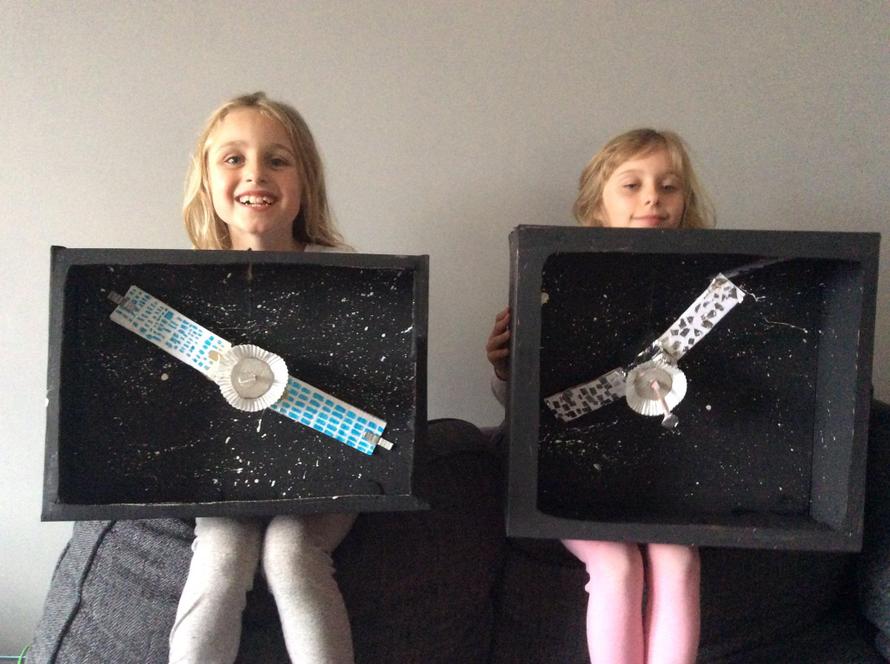 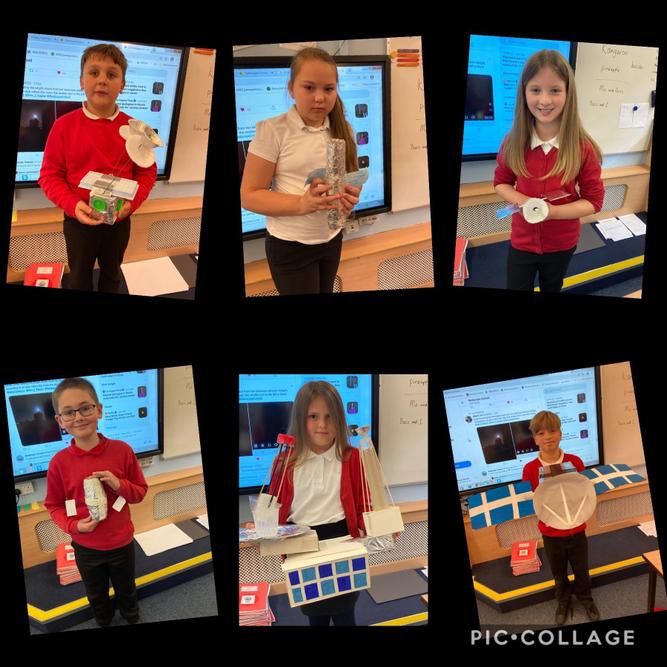 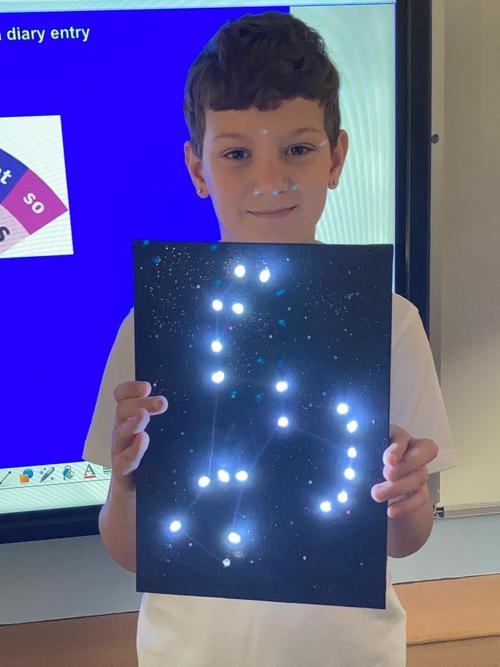